TRENT MILLER - TIME BETWEEN US 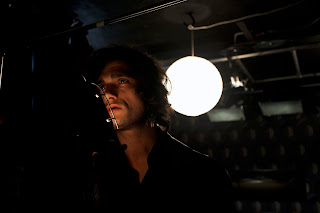 Four years on from the release of the acclaimed Burnt Offerings, London songwriter Trent Miller returns with his fourth album. Time Between Us carries on the trajectory set by its predecessor, which saw Miller begin to emerge from the darkness that overshadowed his first two albums Cerberus (2009) and Welcome To Inferno Valley (2011), towards a hopeful glimmer on the horizon and a new maturity in songwriting.

It’s not all sweetness and light though: the past four years have seen Miller navigate his way through a difficult divorce, as well as conquering his various other demons, and this is reflected in the lyrics. Musically, the album is considerably richer, its sonic timbres sighted midway between the melodic folk-pop of The Byrds and the ethereal shimmer of the Cocteau Twins.

Born and raised in the countryside of north-western Italy, fuelled by dreams of rock’n’roll, Miller made his way to London as a youth, joining the just-blooming Americana circuit. Carrying with him the dual influence of the Beats and darkly troubled songwriters like Gene Clark, Jeffrey Lee Pierce and Thin White Rope’s Guy Kyser, he made his recorded debut on the album Hidden Desert, a tribute to the latter much missed Northern Californians. Releasing his debut Cerberus himself, he later signed up to release his second album Welcome To Inferno Valley with the recording arm of highly-regarded underground magazine, Bucketfull Of Brains, also responsible for John Murry’s groundbreaking The Graceless Age.

Time Between Us is set for release on 6 April, preceded by the single 'How Soon Is Never' on 16 March.

Dark and mystical poetic lyrics, passionate delivery, all blended with dreamy yet shadowy melodies… a unique force in what can be described as twisted and edgy folk MUSIC-NEWS.COM