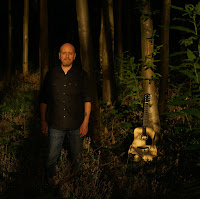 As the title suggests, Restless - the fourth studio album from English songwriter John Forrester - explores the transient underpinning of the lone musician: songs of travel, displacement, creativity and disappointment sit alongside those that explore the journey we all make through life.

While working on the album, a close family member’s terminal illness forced Forrester to pause mid-album and spend time back in his home town to care for his loved one. “You make a life for yourself,” he reflects. “But then you’re pulled back to something in the past. Back in the town you grew up in. There’s definitely a comfort in familiarity but also a disconnect, as you’re now effectively just a visitor.”

These events seeped into Forrester’s writing. “It certainly coloured the album. There are songs that wouldn’t have otherwise existed. The album changed shape.” Previously recorded songs no longer seemed right and new work emerged as Forrester’s world changed irrevocably – and when recording resumed, a broader canvas was laid out upon which the new songs were afforded more room to breathe and be heard.

Working with a producer - Fairground Attraction’s Roy Dodds – for the first time, Forrester was encouraged to play less and not fill every pocket of the aural spectrum. The result is a cohesive yet adventurous album that, although reminiscent of Forrester’s earlier work, explores new ground both musically and lyrically.

From the a cappella opener ‘Richmond Hill’, where the singer earmarks a place of personal pilgrimage for future reflection, to ‘Somewhere I Can Be’, the lead-off single, a song for “all the bits of us that we leave behind”, the general mood of the LP captures the essence, drive and complexities of the restless soul. ‘Butterfly Catcher’ “was inspired by people that seek to take your time and energy when you don’t want to give it. It’s about boundaries and not giving too much of yourself away”, while ‘Restless Bones’ is an autobiographical look at the passing of time and friendships.

Restless is an album born of change – with two very different sides owing to its divided recording process. It’s also a record that relishes in a newfound sense of experimentation and collaboration, while staying true to its creator’s restless soul.

As a solo performer, Forrester has shared stages with the likes of Show Of Hands, Nick Harper and John Kirkpatrick. An accomplished electric and double-bass player, he has also served with Pressgang and, currently, Rastko, The Outcast Band and Robb Johnson.

Restless is due for release on 23 February through Irregular Records.

“By turn poetic and philosophical… Forrester is wise enough to have inherent balance…” – fRoots
“A distinctive and immediate sound… this is something special” – R2 Magazine
“Songs to captivate…  subjective, openhearted, and honest musings” – FATEA