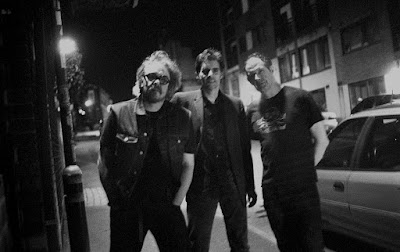 It was recorded virtually live in their rehearsal studio over one weekend with engineer/producer Paul Gray, with minimal overdubs, hence the primal, untamed sound. Combining elements of UK77 punk, Chiswick-era Motorhead and, almost inevitably, The Stooges, close links with Midlands luminaries Swell Maps and The Nightingales might go some way to explain the “hint of post-punk steeliness and economy” that Gus Ironside of Vive Le Rock magazine identified in Black Bombers’ garage-wall of sound.

A former member of seminal punk/post-punk band The Prefects, Dave Twist features on their Peel Session derived, and much anthologised, ‘Going Through The Motions’ single for Rough Trade, as well as touring and recording several albums with The Tenderhooks alongside Dave Kusworth.of The Jacobites.

Black Bombers’ debut release was the limited edition 7” single ‘Crazy’ b/w ‘That Kind’ in early 2015 on their own Key of E label. It sold out within a week, earning a second pressing. 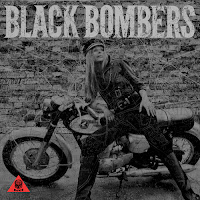 "This debut offering is nothing short of being a collection of gutter anthems, classics in the making from a parallel universe where the punk wars were won by the righteous, Nikki Sudden was not only still alive but Minister for Culture and Wayne Kramer was the focus of a major religion." DANCING ABOUT ARCHITECTURE

“‘Crazy’ is menacing and loose and has the beating heart of some the finer bands of our time, like The Stooges – with some 'Music For Pleasure' era Damned thrown in for good measure, this is fantastic stuff...” UBER ROCK

Posted by MuleFreedom at 06:27 No comments: 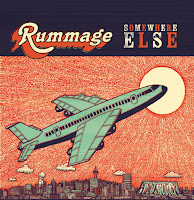 Rummage is one of the many projects of Scottish musician Mark Mulholland, in which he teams up with a couple of friends and long-time musical collaborators,  Rusty Miller and James Finch Jr from Jackpot on a dozen of his songs, laid down at a studio near San Francisco in 2014.

Born in Glasgow, Mark has been playing in bands since the late '80s, travelling the world with stops in Berlin, Paris, Prague and Galway along the way, combining his solo career with various bands and projects such as acoustic roots outfit Two Dollar Bash and indie-rockers Impure Thoughts, as well as session work with Nikki Sudden, Captain Sensible and many others. In 2010, he moved to Haiti for four years, during which time he collaborated on the just released Afro-Haitian Experimental Orchestra project with legendary Nigerian drummer Tony Allen and also with dEUS guitarist Craig Ward, before relocating to Bamako, Mali, where he is working on several new projects with many of the fantastic musicians there, including internationally acclaimed kora maestros Toumani Diabate and Madou Sidiki Diabate.

While in Prague in the early 90s, Mark met Rusty Miller, a songwriter and multi-instrumentalist from Northern California, who has made many albums with his own bands Jackpot and Nightgown, as well as being an in-demand sideman for the likes of Cake, Chuck Prophet and Jason Lytle. Rusty’s European tours and Mark’s US trips permitted the pair to meet quite frequently, before both Jackpot and Two Dollar Bash were invited to the prestigious SXSW festival in Austin, Texas in 2007, where Mark also became firm friends with Jackpot guitarist James Finch Jr. SXSW turned into a regular meeting, and later James worked with Mark on the recording of his second solo album, 2011’s critically acclaimed The Cactus And The Dragon. 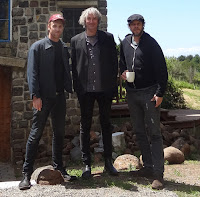 The trio met in California in May 2014 to finally record the album they had talked for years of making. Booking time in the studio James was working in at Stinson Beach, Marin County, they locked themselves in for 5 days, working up to 18 hours a day. The resulting 12 songs range from raw rock'n'roll (‘Ebb and Flow’, ‘Hoodathunkit’), catchy pop-rock (‘Dreaming of Trains’, ‘Claret Blue’), laid-back blues and grooves (‘Give Me A Ride’, ‘Less Than Tomorrow’), up-tempo country (‘Smoke Trails’) to wistful folk and late night melancholy (‘Floods Of Memories’, ‘Fucked Up Again’).

“This record is really about three good friends, who also happen to be extremely talented musicians, having a great time together. Luckily, it's not a private party and there is more than enough here to let the listener join in the good times.”  FATEA

“Adaptable and skilled… The songs show off their range. They are approaching the status of power-pop royalty.” AMERICANA UK

“A very cool and playable record that you'll want to listen to a good few times. 8/10” WHISPERIN’ & HOLLERIN’

“A cohesive collection of songs which somehow not only feel at home on the same album but also uniquely and intrinsically his own.” DANCING ABOUT ARCHITECTURE