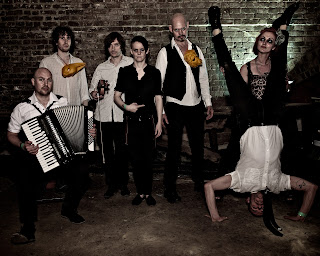 Here come Hackney’s irrepressible folk-punks The Great Malarkey, bringing you their unbreakable kitchen-sink fusion of riot-torn r’n’b, urban skank and swaggering street ska and anything else that takes your fancy. Just so long as it makes your feet move. In-your-face street-corner speechifier Alex Ware and her marauding septet hit you not once but ten times with their tailormade floorfillers in little more than half an hour, scarcely allowing a moment’s breathing space, other than for the occasional moment of bottom-of-the-glass reflection. Their ethos? Get in, get out and leave a heaving mass of happy, drooling, knackered revellers!

Drawing influence from such culturally diverse and mob-handed ensembles as the Pogues, Mano Negra and Fanfare Ciocarlia, with a twist of Tom Waits for good measure, joining Alex in the band are drummer Joni Belaruski, Jason Nash on accordion, Alex Newton on trumpet and Owen Evans with his banjo and guitar. A fiddle was always going to be necessary, and Aidan Banks was only too happy to oblige. The last to join the ranks was Jake Appleby: a man of few words, but he plays the bass like it owes him money.

From an early barnstorming start supporting Toots & The Maytals at just their third gig, the Malarkey-mobile has taken them from guerilla gigs around the capital, up and down the length and breadth of the land and overseas too, from dive-bars to festivals, both habitats seemingly their natural home. Already this year they’ve played Boomtown, Bestival and Bearded Theory. A pound to a penny, Badly Stuffed Animals will find many admirers, allowing the band to winter in sundry smoky dens of iniquity, ready to take to the open air once more in Spring.

Badly Stuffed Animals is out on Clearcut Records on Monday 5 November. They launch the album on Saturday 3 November at Passing Clouds, Dalston, London. Come one, come all!

'Their front woman stole the show from every other front man or woman who performed that weekend' efestivals.com

'I challenge you to keep still while listening to this band' purerawk.com

‘Ten refusals to stop enjoying life… An album worth its weight in gold.’ Louderthanwar.com

ASH GRAY & THE GIRLS - BORN IN THE SUMMER 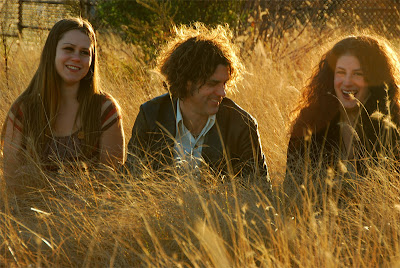 It will be up to fans to figure out if Ash Gray was truly, as he sings on the jangling title track of his latest CD (out in the UK on 19 November), Born In The Summer of Love, but there’s no doubt that the New York based singer/songwriter is drawing from the sweet and glorious rock and folk sounds of the late 60s as he continues to take the possibilities of pop harmonies and vocal arrangements to exciting new realms.

Truly living up to the title of his 2010 debut EP This Could Be A Wild Night . Gray’s group Ash Gray And The Girls has survived several intense line-up changes and now features the powerhouse harmony vocalists Nina Murphy and Sarah Wise. The group’s eclectic 11-song full-length debut Born In The Summer boasts tracks that feature these two singers balanced by others recorded when the former line-up was in place. Their recent four-date stint at South By Southwest, and Texas Rock Fest during the 2012 event, brought Gray full circle. Not only did he live in Austin for years before moving to NYC, but also the first incarnation of Ash Gray and the Girls showcased at South by Southwest 2009.

Despite the personnel shifts, the essence of Gray’s concept has been consistent—and continues to be a crowd pleaser at his many acoustic shows around New York (including the weekly open mic he hosts at The Local 269 in the Lower East Side of Manhattan) and his monthly full band gigs at hotspots like Pete’s Candy Store and Bowery Electric. With their vibrant stage presence and emphasis on vocals and harmony, Ash Gray and The Girls bring back the days of the big backing vocals with a modern twist. Somewhere between The Mamas and The Papas, The Stones and White Stripes, the group features punchy, high spirited two and three minute songs driven by a simple mix of percussion, acoustic guitar and vocals.

Born in the US to British parents, Gray first began to make inroads into the UK music scene when he visited from Austin, Texas and assembled the Anglo-American ‘punk-grass’ band, the High-Class Family Butchers. Achieving notoriety (and some airplay) with their back-porch covers of pop classics and guerrilla-gigging, the Butchers have continued over the years with a flexible line-up including members of Menlo Park, The Ralfe Band and folk poster-boy Seth Lakeman’s band. For a time they even included Harper ‘Son of Paul’ Simon, oddly enough.

Relocating to New York, a few years ago with short-lived 90s hard rock throwback band Cycle Sluts From Hell, Gray began shifting gears after realizing that his female guitarist KG was a great harmony singer who blended perfectly with his backing vocalist Helen. He launched Ash Gray and the Girls in late 2008 as an acoustic trio, with him on vocals and acoustic guitar and these two singers. To make the sound bigger and increase his ability to experiment with more elaborate harmony and grooves, Gray added Mary and Abbi, who along with Helen were “The Girls” for several years.

THE RETURN OF LOWLANDS 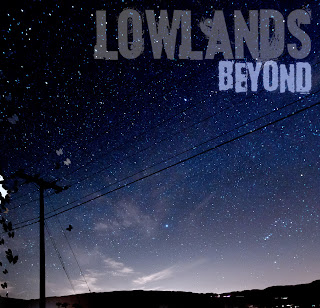 Italy’s number one roots rock band Lowlands return with their most rocking album yet in the form of Beyond, out on 10 December on Stovepony/Gypsy Child Records distributed by Cargo. Produced by ex-Soul Asylum keyboard player Joey Huffman the band explores and explodes the boundaries of what they had previously achieved releasing what is their most eclectic record. Ten brand new tracks, from punk rock to acoustic ballads, which capture the exuberance and variety of their live shows. Rock’n’folk.

Formed in 2008 in Pavia outside Milan by British-born singer-songwriter Edward Abbiati, Lowlands quickly established themselves in mainland Europe with their debut album The Last Call, and have made a number of friends on the international scene leading to a co-write with Tim Rogers of Australia’s You Am I, a duet with the lovely Amanda Shires (Jason Isbell, Rod Picott, Justin Townes Earle, Matthew Ryan) and guest appearances from ex Soul Asylum Joey Huffman, US fiddler Amanda Shires and ex-Green On Red organist Chris Cacavas, who also mixed their 2010 album, Gypsy Child, which was widely praised in Europe and the US and picked up substantial airplay in the UK.

Having toured heavily throughout late 2010 and half of 2011, on return to their hometown the band splintered, with a nucleus of Abbiati, guitarist Roberto Diana and keyboard player and accordionist Francesco Bonfiglio eventually recruiting Righetti and Pellati – who have literally played every bar and every stadium in the country – to record the third album Beyond (released Oct 4th 2012).

The new album follows hot on the heels of Better World Coming, a tribute to Woody Guthrie recorded in downtime from the Beyond sessions and widely praised across Europe as one of the best roots releases of 2012.

“A stunning, lo-fi and heartfelt reappraisal of the great man’s songs…sweet and harsh in equal measure, this is clearly an album born in and built for hard times.”  ***** R2 Magazine
“Stunning…”  **** Maverick Magazine
“This band could have a very bright future” 9/10 Americana-UK.com
“Just like Leone took the western and made it grittier, Lowlands have taken Americana and dusted it up and made it more believable. A fantastic album” **** BRFM (Wales)

www.lowlandsband.com
Posted by Gerry at 03:43 No comments: