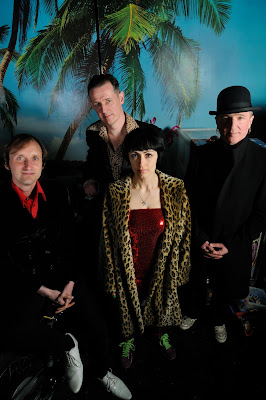 Hit The Strip, the debut longplayer from LUXURY CONDO out on 4 July, introduces Hackney’s loungecore elite to the wider world. From the brooding instrumental intro of the title track with its seductive, smoky organ’n’vibes combo, they take you on a sunset trip of the bright lights and dark corners of the seedier side of the city, retro-referencing Link Wray, Frankie Laine, and low-budget porn film soundtracks! Across eleven tracks of swing, blues, rockabilly and rumba, the band conjure the faded glamour of Blue Velvet, the beaten-down barroom loser humour of Trees Lounge and the dash-cutting bonhomie of Swingers.
Recorded at the famed Gizzard Studio in East London with Ed Deegan, Hit The Strip features all three of the band’s singles – ‘Don’t Shoot Mr President’, ‘Escalado Man’ and ‘Gorilla Gorilla Gorilla’.  The last of these is possibly a nod to guitarist Andy Butlin’s double life as a zookeeper, while ‘Escalado Man’ might be inspired by retro pastime buff and drummer Pinball Geoff, who even has his own pinball museum!
All three singles have received promising airplay, with ‘Gorilla…’ recently picked by Tom Robinson on BBC 6Music.
With a pedigree encompassing such legendary Stoke Newington alumni as Gretschen Hofner, Menthol Weapon, The Bikini Beach Band and King Salami & The Cumberland Three, LUXURY CONDO are completed by bassist Pam Donaldson and organist Jim Bishop. The band have built a strong live reputation over the past few years, gaining plaudits a-plenty for their showstopping appearance on the Lost Vagueness stage at Glastonbury.
LUXURY CONDO play Abney Park Festival, Stoke Newington, London N16
on Saturday 2 July.
www.myspace.com/luxurycondo
www.pinballparlour.co.uk
Posted by Gerry at 04:41 2 comments:

INTO THE SPRING WITH THE BAND OF HOLY JOY 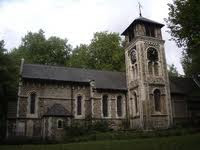 The Band Of Holy Joy will be ushering in the Spring with a special show for Easter Week at the venerated St Pancras Old Church in London. The gig coincidentally takes place on the eve of the great occasion of the wedding of our future King and his English Rose, something not lost on frontman Johny Brown who promises “songs of pain and songs of misery, songs of protest and songs of joy, songs that I say must be heard and shared and enjoyed and disseminated virus like through the barren streets.”
The band will be supported by 12-string space-blues pioneer Simon Onions, along with your DJ for the evening, Mr Jonny Mugwump.
The show follows hot on the heels of the band’s latest single, the download-only double A-side On The Ground Where John Wesley Walked c/w The Black Middens released on their own Radio Joy label on 7 April, about which The Mirror trumpeted “This song of highflown yearning featured in lead man Johny Brown's excellent recent radio play The North Is Another Land. The BOHJ's sensitivity allows the song to travel an extra special spiritual mile.****”
Tickets for the St Pancras show are available now from http://www.wegottickets.com/event/108597
The Band Of Holy Joy were formed out of the 80s South London squat scene by Newcastle émigré Johny Brown. After a hiatus during the 90s, where Johny concentrated on various other projects, they returned in 2002 with the album Love Never Fails on Rough Trade. Since then, eschewing the traditional album-tour-album treadmill, the band have chosen to explore other media, launching their own internet radio station Radio Joy in 2007, and presenting the play Troubled Sleep at the Shunt Theatre in London and The Star and Shadow Cinema in Newcastle in 2009. Johny has also hosted the immensely popular Mining For Gold show on Resonance FM for a number of years.
The Band’s 1987 track Who Snatched The Baby? was recently included on a MOJO magazine CD, Panic: 15 Tracks Of Riotous 80s Indie Insurrection. Nearly a quarter-century on, The Band Of Holy Joy are as relevant as ever.
Here comes hope, here comes faith, here comes clarity
www.bandofholyjoy.co.uk
Posted by Gerry at 03:09 1 comment: 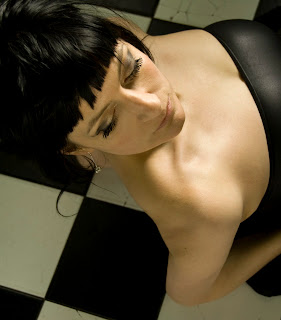 MADAM – the group project of singer-songwriter-producer Sukie Smith – announce the first in a series of intimate shows to celebrate the release of their second album Gone Before Morning on Sukie’s own label Shilling Boy, distributed by CARGO.
The band play at The Horatia, 98-102 Holloway Road, London N7 8JE on Saturday 30 April. In a show presented by Ruth Barnes of The Other Woman/6Music, the full six-piece band will be onstage at 9.30pm.
Gone Before Morning was originally given a limited download-only release in April 2009 as part of high-end audio company Bowers & Wilkins’ website-based Music Club, which afforded Sukie and band the opportunity to record at Peter Gabriel’s Real World studios. The release was available for one month, and in that time gained considerable praise from Club members and press alike.
But Sukie always believed the work deserved wider exposure and has spent the Autumn of 2010 making final embellishments to the album at Reservoir Studios in North London to make Gone Before Morning what it is now. Sukie has been able to do this thanks to the website www.pledgemusic.com which gives fans the opportunity to provide financial support to artists in return for a unique memento of the project.
Gone Before Morning comprises eight original songs, combining elements of trip-hop, Western gothic and Europop with Sukie’s own expressive widescreen vision. It also includes deconstructed takes on Odyssey’s ‘If You’re Looking For A Way Out’ and Al Wilson’s Northern Soul classic, ‘The Snake’.
MADAM’s debut album In Case Of Emergency was released on the Reveal label in February 2008, to universal acclaim.  Later that year Sukie provided the score to the British independent film, Hush Your Mouth, featuring her song ‘Ride The Waves’ as the prominent ‘outro’.  The film recently won Best Film and Best Director at the Portugal Film Festival. In April 2010 she collaborated with Italian band Hollowblue on the co-write ‘Wild Dogs Run’, appearing with them in the Europe’s first ever 3D music video, which won the award for Best Music Video at Hollywood’s 3D Film Awards 2010.

Press
“compellingly gritty and haunting”  4/5 Q
“Contender for the noir niche occupied by Hope Sandoval and Chan Marshall… a real find”
4/5 The Guardian
“Madam is a name which should be written in bright neon outside big venues in the swanky part of town”  4.5/5 The Sun
“…head and shoulders above the singer-songwriter masses ,as individual a voice as Cat Power or Joan As Police Woman”  The Independent
“An astonishing album of cruel beauty and emotional honesty, an immense talent” 4/5 R2
“Like an imaginary soundtrack to An American Dream, full of desire, sadness and beauty, In Case Of Emergency is a surrealist masterpiece”  Gideon Coe, BBC 6Music
www.madam.org.uk        www.myspace.com/madammusic         www.facebook.com/madammusic
Posted by Gerry at 07:33 No comments: 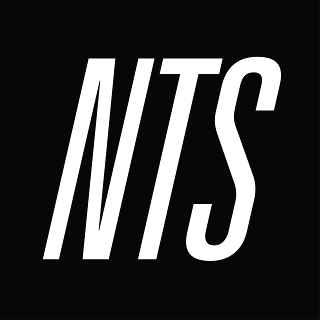 MuleFreedom is very proud to be involved with NTS, a new online radio station now broadcasting live out of Dalston, East London. MuleFreedom's Sunday Pint can be heard between the hours of 11.00am and 1.00pm every Sunday starting from 10 April. We'll be playing Pub Rock, Country Rock, Garage Rock, Folk Rock, Kraut Rock and Space Rock and pretty much anything else that takes our fancy. Also, if we can get to grips with the technology, we hope to have the occasional guest in from time to time. We hope you enjoy the show, as well as the rest of the great stuff currently being played on the station, which can be accessed at www.ntslive.co.uk
Posted by Gerry at 07:47 No comments: