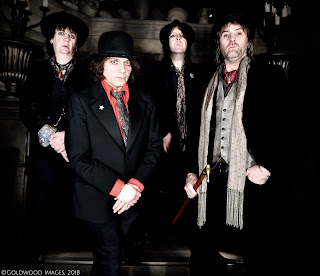 The past is a foreign country, or so they say. No doubt Last Great Dreamers would agree with that. Barely 18 months has passed since their last album – their first all new full-length since their 2014 rebirth – and now the UK power-pop rockers step up with a freshness and fire that would put many new bands to shame.

Holed up in Oxfordshire’s Henwood Studios with producer Pete Brown (son of Joe, brother of Sam), original Dreamers Marc Valentine and Slyder, together with drummer Denley Slade and bassist Steve Fielding, have laid down their most complete and accomplished album yet. 13th Floor Renegades comprises eleven infectious punk-pop floorshakers, replete with dynamic shoutalong choruses and more hooks than audition day for a particularly piratical panto season. Power-pop crunch and effortlessly melodic riffing rule the roost, letting up only occasionally for the twinkling mandolin of folky Faces-ness.

“Everything fell into place at the right time,” explains Marc. “We started a Pledge campaign for the album, which had a fantastic response. The fans’ involvement was truly incredible and their generosity never ceases to amaze us. Hopefully with this album we get to repay their faith. It’s really been an organic process from start to finish, with a few twists and turns along the way, but we’re really proud of what we’ve managed to achieve in a short space of time.”

Originally coming together in London during the early 90s, Last Great Dreamers quickly became darlings of the glam-punk scene centred around Soho. Gaining props for debut album Retrosexual, earning a nomination for Best New Band in the prestigious Kerrang! awards, and supporting major US touring bands, they couldn’t face off the juggernaut of Britpop and went on hiatus.

Since their return, they’ve released two albums – the rarities set Crash Landing In Teenage Heaven and the all new Transmissions From Oblivion – and toured widely, both as headliners and support to the likes of Cherie Currie, Bernie Tormé and The Quireboys.

13th Floor Renegades is out on Friday 13 April through Ray Records. They play the following dates...

"They belong in the Rock'n'Roll Premier League...” Maximum Volume Music
“It’s a triumph of an album…4.5” Pure Rawk
“Every (and I mean EVERY) song is an absolute cracker…” Louderthanwar
"This album is truly a sign of a totally rejuvenated band.” The Soul Of A Clown
“Their finest, most accomplished album to date." Uber Rock