THE (10-INCH) VINYL COUNTDOWN FOR THE DUBLO AND MONKEY ISLAND 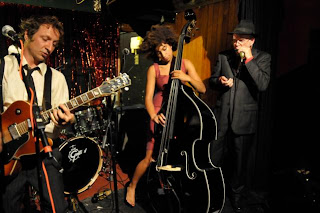 L-13 Recordings, the musical arm of Clerkenwell’s L-13 Gallery, present this joint offering from two of Hackney’s most forward-thinking, backward-looking bands.  Pressed on deluxe 10-inch vinyl, from hand-cut masters, and housed in individually-numbered hand-printed sleeves, each collectable disc comes complete with a free download code for the more…. modern… among you.

In this eight-track core sample of the terrain Monkey Island have been inhabiting over the last year or so since the release of Luxe et Redux, the body of rock has been mischievously rearranged on the slab post-exhumation and a cross section of the results displayed for scrutiny. The strata on view present us with a neo-vista of the bands recent activity. Mudrock, hardcore, metal-ore, artefact and other grim evidence of civilisation are ploughed into the arising midden via their bulldozing sonic archaeology, with the polluted industrial top-soil of punk liberally scattered throughout. A lyrical commentary is provided, its disrupted narrative doing little to assist a linear analysis, but leaving us with their wilfully hammer-headed version of rock's megalithology and - fracked from an unsteady substrata of half-forgotten ideology, folk forms, surreal observation and digibox truisms - a few dark-humoured clues of how to maintain hope, and grinningly sidestep a seemingly catastrophically corporate future.

Released on 10 April on a label whose roster includes Billy Childish, James Cauty and Jamie Reid and reads like a Who's Who of underground pioneers and media certified outsiders, the record is a split with fellow eastenders…

Fronted by a twenty-something-year-old, double-bass playing Hackney gal, their take on the blues is more revisionist than retro. Lo-fi and underground - in part recorded completely live - their unrepentantly independent stance and refusal to pander to a miseryologist interpretation of the blues, has allowed them to illuminate the twilight zone between rockabilly, blues and folk scenes, then slip away unnoticed in the dead of night after serious fun has been had by all. Drawing inspiration in part from both singer and bands coming of age in an area once charmingly known as the murder mile, this three track debut is a taste of the twenty-odd self penned songs, spanning rock n' roll, boogie, gospel and jazzy standards the band has written over the last couple of years.