“Loneliness as a sentiment seems to be a prevailing theme in my songs. I am always looking for that old lonesome feeling in a chord change or some melody line." 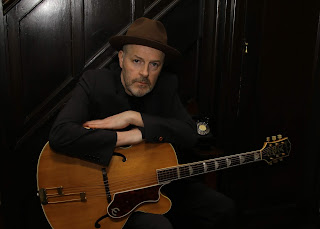 Two years in the making, the debut album by Scottish songwriter Drew Morrison and his band The Darkwood follows their critically well received Tales of Love, Sadness & Rock‘n’Roll EP, described by PennyBlackmusic as “a fine first offering of enormous potential from which promises much for the forthcoming album”.

Electric-Notes Wild, released on the band's own Storm Cloud Agency Records, is a collection of 10 tracks showcasing Drew Morrison and his love of song. A questing musical soul, Morrison has described his music as being for “the lonesome fugitive within us all”.

In The Darkwood he is backed by Phil Carwardine and Martin Murray (guitars), Mike Hughes (bass, backing vocals) and Nick Steyn (drums). Despite line-up changes along the road, the band's central vision of a music touched by influences ranging from alt.country, pop and rock’n’roll, all tinged with 'golden chording', has remained focused and has realised itself into a unique sound.

At the Country Soul Sessions in London’s Soho the band are simply known as 'the house band' and have, over five years, performed with the acts that have played at the club; artists such as Rotifer, Paul McClure and The Local Heroes, Matthew Edwards and The Unfortunates, Morton Valence, Bob Collum and The Welfare Mothers, Lynette Morgan and The Blackwater Valley Boys and many, many others.

The album was recorded at Bonafide, Reservoir and Project-a-Sonic studios with guest musicians including Tim Pearson of the East Lonesome Drifters and Henry Senior from Danny and the Champions of the World.

Electric-Notes Wild is a set of songs born from innocence, experience and ultimately the faith in the powers of music to still entertain and thrill.

"With its beautiful harmonies, exquisitely-crafted arrangements and Morrison’s empathetic and literate lyrics, it is an album of exceptional quality." Pennyblackmusic

“Quality control is something Drew Morrison and The Darkwood excel at and Electric Notes Wild is the perfect example of that." Dancing About Architecture