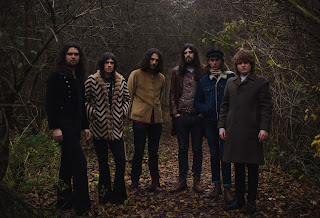 Swordfish Records presents the debut album by The Mothers Earth Experiment, a six-piece contemporary progressive outfit from the West Midlands.

With a wide range of influences from electronica, jazz, world music and psychedelia all the way to black metal and back, the band of childhood friends pride themselves in their eclectic inspirations to weave detailed sonic tapestries of dense psychedelic atmospheres and emotive melodies in order to propel their message of social consciousness and environmental awareness.

“We feel artistic freedom has become feared within the music industry, and we aim to express what is close to us through our music and art.”

The release of their debut EP Don’t Speak Against The Sun in September 2015 and their first show supporting Gong has led to a series of dynamic performances across the UK, gaining a reputation as a band with a lot to say. In the past year they’ve supported the likes of Syd Arthur, Soft Machine, Acid Mothers Temple, Nicholas Allbrook (Tame Impala, Pond), Braids and Arthur Brown.

The six-track self-titled album will be available on limited edition multi-coloured splatter vinyl in a gatefold sleeve as well as on CD and download.

Launched in 1987 out of their Birmingham city centre store, Swordfish has built a deserved reputation for high quality rock and psych releases from the likes of Acid Mothers Temple, Keiji Haino, Roky Erickson and Godflesh.

“A perfect fusion of jazz, funk and progressive psychedelia” Counteract