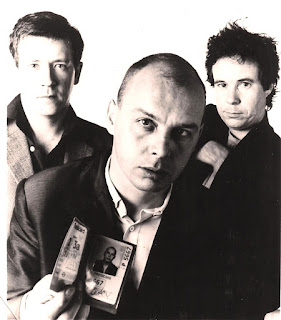 “There’s an English band I like very much. Nobody seems to have heard of them. They’re called The Screaming Blue Messiahs and I’m pushing them like mad. I think they’re really good. There’s an element of The Clash in them that I really like. But there’s something else there. I’m not really sure what it is. There’s an exciting guitar player. He’s a sort of a new wave guitar player, but they’re an angry mob from London.”
David Bowie, Words & Music Magazine, 1988

Formed out of the ashes of Feelgood- and Beefheart-channelling London pub rockers MOTOR BOYS MOTOR, the band released their Vic Maile-produced debut mini-album Good And Gone through Big Beat Records in 1984, before signing to WEA for the full-length Gun-Shy in 1986.

Touring the world, including several dates with THE CRAMPS, the band – guitarist/vocalist Bill Carter, bassist Chris Thompson and drummer Kenny Harris – released their second full-length album Bikini Red – featuring Top 30 single ‘I Wanna Be A Flintstone’ in 1987. That year, no less a figure than DAVID BOWIE proclaimed them his favourite current band, inviting them to play two stadium dates – Cardiff Arms Park and Sunderland Roker Park –  on his Glass Spider tour.

Switching to Elektra for 1989’s Totally Religious – recorded in Miami, Maryland and London – a falling-out with the label caused the album to be withdrawn, and the band split the following year, playing their final show at London’s Subterrania venue in June 1990. Their major label catalogue has long since been unavailable.

Compiled by Easy Action Records with the full co-operation of all three band members, across five CDs Vision In Blues includes all four of their original releases, plus a fully audio-repaired and re-mastered live recording from Zurich in December ’89. The set is bolstered by numerous bonus tracks, including five from a show at London’s ULU, and illustrated by a lavish 24-page booklet, with cover design by Bill Carter himself. It’s topped off with a 7” single featuring of ‘Vision In Blues’ c/w ‘Let’s Go Down To The Woods’/ ‘Good And Gone’.

Easy Action are also issuing a full-length version of the Good And Gone album on limited edition coloured vinyl.