THE DELTA JACKS - TROUBLE AHEAD

Roots-rock and country-punk from the badlands of the Thames Delta! 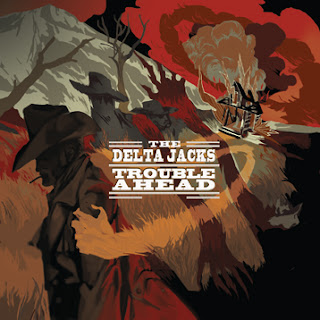 The marshy hinterlands of South Essex have proved a fine breeding ground for bands over the past few decades. A wilderness where scores of musicians can practice their craft in isolation, giving them a distinct edge unlike their urban counterparts; from Dr Feelgood, Kursaal Flyers and Eddie & The Hot Rods to The Horrors, These New Puritans and The Lucky Strikes. It stands to reason that The Delta Jacks’ debut album will follow suit.

Formed in 2011, the band earned their spurs on the UK Americana circuit, saddling up and heading for The Smoke for gigs at such illustrious roots venues as the 12 Bar, The Gladstone and Camden’s Lock Tavern, as well as regular airplay on Resonance FM’s long-running Bonanza show. In that time headline shows have been interspersed with high profile support slots with the Jim Jones Revue, The Lucky Strikes, Mudlow and Son Of Dave.

Releasing their debut self-titled EP in 2013, over the past year the Jacks have been putting the finishing touches to their first full-length album Trouble Ahead at Church Road, Ford End and Broom Cupboard studios. The result is eleven barely-tameable tracks of banjo-infused hillbilly rock, destined to appeal to fans of Johnny Cash, Legendary Shack Shakers, Slim Cessna’s Auto Club, Violent Femmes, Cormac McCarthy and Zane Grey.

The Delta Jacks play an official album launch at The Asylum, Chelmsford on Saturday 31 October, with support from The Lucky Strikes and Southern Generals.

“The Delta Jacks are a rough and ready hard edged country rock'n'roll act. High tempo and hard as nails, they're the ideal Saturday night Americana band!” - Rory Carlile, The Gladstone

https://www.facebook.com/thedeltajacks
Posted by Gerry at 06:32