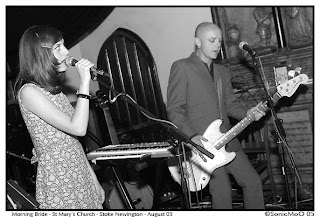 “A brilliant roots-rock band with solid gold tunes” (according to the late, lamented The Word magazine), Morning Bride return with their long-awaited second album The North Sea Rising, the follow-up to their critically-acclaimed debut Lea Valley Delta Blues.

The North Sea Rising is in turn big-skied and lo-fi; sometimes dark, often blue, but ultimately life-affirming, and always with an inherent pop sensibility. Variously described as gothic Americana, off-kilter folk rock, alt-country pop and most things in between, Morning Bride remain as resolutely impossible to define as ever.

Amity and Mark's lush harmonies blend effortlessly with Pete Bennett’s bottleneck guitar, against a backdrop of strings, melodicas and organs, creating a trademark sound described by The Independent as 'astonishing'.

PRAISE FOR LEA VALLEY DELTA BLUES.....
“ASTONISHING.... EVERY ONCE IN A WHILE YOU STUMBLE UPON A BAND AND WONDER HOW IT IS THAT NOT MORE PEOPLE KNOW ABOUT THEM, BUT ARE SECRETLY PLEASED THEY DON'T. MORNING BRIDE ARE THAT KIND OF BAND” - THE INDEPENDENT
"A SHIMMERING SLICE OF ANGLO-AMERICANA TO DRINK AND DIE FOR" - PLAN B MAGAZINE
"SPELLBINDING" – R2 MAGAZINE
"ROOTSY ROCK POP TUNES WITH BIG FAT HOOKS THAT ON ANY REASONABLE PLANET WOULD BE ALL OVER YOUR RADIO” – 9 out of 10 - AMERICANA UK
"DARK YET LUSH COUNTRY-TINGED POP - RECOMMENDED" - TIME OUT MAGAZINE