STIV CANTARELLI AND THE SILENT STRANGERS 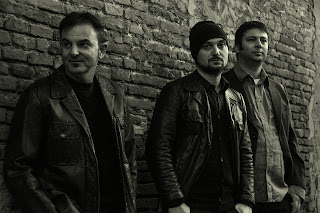 In 1999 Stiv Cantarelli and his band Satellite Inn signed their first record deal with MoodFood Records of Cary, North Carolina. Funnily enough, they’d been asked to replaced Ryan Adams’ Whiskeytown who were moving to Outpost Records and already bound for glory. After months of hard Stateside graft, MoodFood got the roots rock classic Cold Morning Songs out of the deal; Stiv gained firm friends in Portland, Oregon band Richmond Fontaine, who wound up backing him on his 2011 solo album Innerstate (released on RF’s El Cortez label), mixing the raw edges of punk rock with border stories that could have come from both sides of the Atlantic.

“Plenty of promises here, not least the lowdown delights of The Rookie” – Uncut Magazine
“It’s a gentle gem of an album with songs built to last” – R2 Magazine
“Excellent stuff” – ElectricGhost

If Innerstate was the soulful chronicle of a roadtrip, then Black Music/White Music may be considered a change of pace that was much needed, mainly by Stiv himself. Uncertain about what to do, he decided to wipe the slate clean and start over. To allow a real change Stiv needed his family's help. He returned to the days of Satellite Inn. Together with his pals Antonio Perugini and Fabrizio Gramellini, they became Stiv Cantarelli and the Silent Strangers. An abandoned church in  their homeland in the middle of Tuscany’s Romagna hills provided the perfect scenery for a series of recordings. The raw energy of those sessions and the stripped-to-the bone music that came out from them, blended with large doses of swamp blues and massive injections of never hidden post-punk roots (recently rediscovered on dates with Bob Mould) became the mainline. Even Stiv's often obscure lyrics became deeper, and darker, to give birth to what was in the plot from the very beginning. A change.

In order to get the complete picture, enter Petrushka Morsink (Willard Grant Conspiracy, Transmissionary Six, Cords). Stiv's longtime friend and collaborator took the master to her own Studio Metro in Enschede, Holland, to enlighten the songs with razorblade guitar riffs, outerspace sounds and melancholic backing vocals. She crafted Black Music/White Music by creating a unique spectrum of sounds that very much explains the working title and tells a lot about what Stiv Cantarelli and the Silent Strangers’ music was made with.

Black Music / White Music is released on Stovepony Records on Monday 18 February when Stiv and the band will be touring the UK...