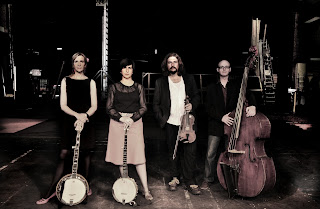 With the success of their highly acclaimed debut album High Bright Morning, and their atmospheric and evocative live performances, Edinburgh’s Blueflint have built a strong reputation and following. Their much anticipated second album Maudy Tree promises to raise their profile even further.
The sound of Blueflint is defined by the sublime close harmonies of Deborah Arnott and Clare Neilson whose voices, both ethereal and warm, interweave in ballads and songs of eerie melancholy and heartfelt charm.
Intertwining banjos, fiddle, double-bass and drums accompany the singers in beautifully-crafted songs that swoop easily from the dark underbelly of folk to buoyant Americana-tinged ballads. Blueflint successfully thwart attempts at musical pigeonholing; their fresh and original sound refuses to sit squarely in any one genre, bringing an unexpected twist to the banjo sound and gaining them fans from across the musical spectrum.
Maudy Tree was recorded ‘live’ as a five-piece band to recreate the energy and emotive texture of Blueflint’s sound. While each song bears its own unique flavour and mood, the tracks weave together into a truly memorable album, with a strong supporting cast of players to take us along the Blueflint way. Opening with ‘Light In the Window’, the album swoops down into the intimate and dark ‘Maudy Tree’, before bouncing into the joyous love song ‘Take Your Shoes Off'.  The heart-rending ‘High Country’ sits alongside poignant country-tinged ‘Mary’ which is followed in turn by the the ballad of the murderous ‘Mr Lovealie'..The album signs off with ‘Barren Lands’ as its parting note.
2010/11 saw the band touring throughout the UK and Ireland to festivals and venues including Celtic Connections, Edinburgh’s Hogmanay Street Party, The Wickerman, Belladrum. High Bright Morning gained national radio play (BBC Radio Ulster and BBC Radio Scotland), and the band also appeared in a live interview and performance on Scottish television programme The Hour.
The band are touring throughout the UK and Ireland in autumn 2011 to promote the release of the album.
Blueflint are: Deborah Arnott on vocals, banjo and ukulele; Hugh Kelly (Longway) on double-bass; Clare Neilson on vocals, clawhammer banjo; Roddy Neilson (Peatbog Faeries) on fiddle and vocals.
R2 ****   The List *****   The Scotsman ****   The Skinny ****   Daily Express ****
“This is a Scots triumph... excellent songwriting”  The Scottish Herald
www.blueflint.org.uk
Posted by Gerry at 05:08