M G BOULTER - THE WATER OR THE WAVE 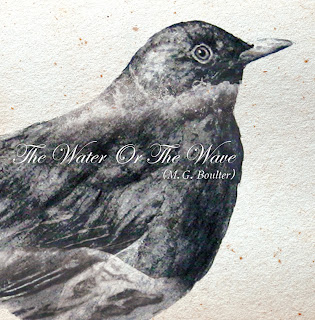 After being forced into hibernation by the long winter, Lucky Strikes frontman Matthew Boulter emerges with his second album of glorious, gentle, life-affirming songs to take us into Summer. The Water Or The Wave features eleven original songs, conceived on the road at various folk club and festival shows throughout the past year and given life beside the grassy marshland and mudflats of his South Essex home on the Thames Delta.

Releasing his debut album in Spring 2012 under the name The Whispering Pines, Matthew has been an integral member of The Lucky Strikes since 2007, starting out on bass before switching to guitar and vocals, as well as penning much of their material. A highly proficient pedal- and lap-steel player, he’s much sought after on the UK Americana circuit; something that led to him being invited to play with New York songwriter Simone Felice.  Since accompanying Felice on various dates including a prestigious Green Man Festival headline set in 2011,  Matthew has become  a full member of The Simone Felice Band, touring the US and UK, also opening shows as solo performer.  Despite this impressive workload, Matthew has continued to lend his many skills to shows and recordings by the likes of Cusack, Deer Park, Dead flowers, Neil McSweeney, Rosalie Deighton, Conor Oberst and members of Mumford & Sons. On The Water Or The Wave, M G Boulter turns another page…

Praise for The Whispering Pines…

“Gorgeous, in a word” **** Uncut
“A dreamlike album of lyrical beauty…. Another very fine addition to a promising portfolio” **** R2
“A pleasant, smoky vibe…. Check him out” **** Maverick
“When you hear an album that reminds you of your childhood and your dreams, the best film you’ve seen all year, your favourite record of all time, and your first love – that has to be a good day” No Depression
“Introspective, gentle, tinged with darkness and a sorrowful undertow, these are elegant songs delivered with restraint and oodles of world-weary charm” FATEA
"Beautiful, engaging, and not quite like anything else out there" Flyinshoes