BLUEFLINT SUPPORT THE PROCLAIMERS ON TOUR 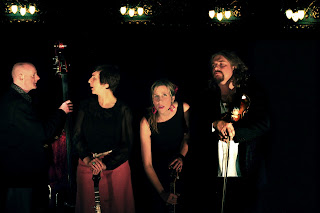 Blueflint are delighted to announce that they will be supporting The Proclaimers on their Like Comedy UK album launch tour during autumn 2012. See full dates below.


The sound of Blueflint is defined by the sublime close harmonies of Deborah Arnott and Clare Neilson whose voices, both ethereal and warm, interweave in ballads and songs of eerie melancholy and heartfelt charm.  Intertwining banjos, fiddle, double-bass and drums accompany the singers in beautifully-crafted songs that swoop easily from the dark underbelly of folk to buoyant Americana-tinged ballads. Blueflint successfully thwart attempts at musical pigeonholing; their fresh and original sound refuses to sit squarely in any one genre, bringing an unexpected twist to the banjo sound and gaining them fans from across the musical spectrum.

Their second album Maudy Tree has received national radio play (BBC Scotland, BBC Wales, BBC Ulster, BBC Radio Nan Gaidheal, BBC Shropshire and many internet radio sites,) and the band undertook a successful UK and Irish tour in Autumn 2011 to promote the new album.  In addition to the tour schedule with The Proclaimers, Blueflint will be performing at a number of UK venues over the summer including...

The band are available for interview.