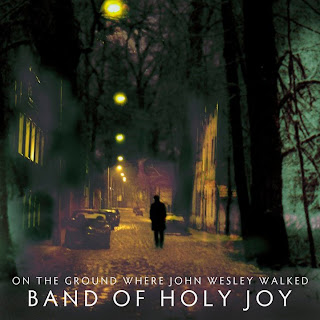 After the slaughter the fields stood silent, empty and silent, the footpaths and bridleways closed

The Band Of Holy Joy follow up January’s Oh What A Thing, This Heart Of Man single with the download-only double A-side On The Ground Where John Wesley Walked c/w The Black Middens on their own Radio Joy label, again drawn from the six-part radio play The North is Another Land broadcast on Resonance FM last Autumn.
A double racket of rural northern punklore that harks back to other spaces, other times, whilst speaking most presciently of the state of mind of this land as it is right now and all the while serving as a savage prayer for better brighter days to come.
To celebrate the release, the Band Of Holy Joy will be performing a special show for Easter Week at the venerated St Pancras Old Church in London on Thursday 28 April.
The Band Of Holy Joy were formed out of the 80s South London squat scene by Newcastle émigré Johny Brown. After a hiatus during the 90s, where Johny concentrated on various other projects, they returned in 2002 with the album Love Never Fails on Rough Trade. Since then, eschewing the traditional album-tour-album treadmill, the band have chosen to explore other media, launching their own internet radio station Radio Joy in 2007, and presenting the play Troubled Sleep at the Shunt Theatre in London and The Star and Shadow Cinema in Newcastle in 2009. Johny has also hosted the immensely popular Mining For Gold show on Resonance FM for a number of years.
The Band’s 1987 track Who Snatched The Baby? was recently included on the MOJO magazine CD, Panic: 15 Tracks Of Riotous 80s Indie Insurrection. Nearly a quarter-century on, The Band Of Holy Joy are as relevant as ever.
Here comes hope, here comes faith, here comes clarity
www.bandofholyjoy.co.uk
www.radiojoy.co.uk
Posted by Gerry at 04:54